November was an excellent example of the tremendous value offered by a one-year subscription to Webcomics.com ($2.50 a month). My readers got early alerts on issues that would impact their businesses, helpful tutorials, insightful analysis, and meaningful feedback on their work.

We wrapped up what may be the final Hot Seat critique series of the year with a “Random Punchline Hot Seat” aimed specifically at humor comics. Here’s how it works, participants submit their URL, and I go to the site and select a few comics at random. Then I’ll discuss some of the entries in a post, opening up the topic to the members for a wider critique. 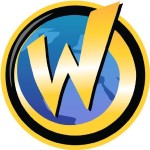 According to the NY Post, “Stephen Shamus, 42, helped select celebrities for fan gatherings run by Wizard World, which pays stars to show up and sign autographs for fans — but often fenagled the high-profile figures into signing memorabilia for him personally.” Read the entire piece here.

Patreon has just revamped its posting interface. You can now schedule posts — and the interface for the posts themselves have changed. Here’s what you need to know… [Subscribers can read the entire post]

The Evolution of Webcomics Reading Habits

I think we’re entering a new phase in webcomics — one shaped largely by social media — that requires us to pay closer attention to how readers are consuming our content.

In short, our readers have evolved. And if we’d like to remain in business (or break in), we’re going to have to understand that evolution — as well as where it leads.

Here’s an example. On those (rare) occasions that I post something on Reddit that doesn’t get downvoted instantly, I’ll check my stats the next day to find that — although the Reddit link drove a large amount of traffic to my site — almost nobody stuck around to check out the other comics on the site! 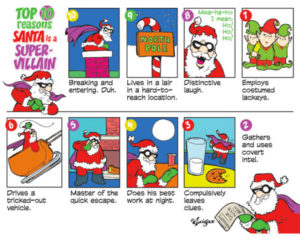 Saying thank you during the holiday season

For many of us, our businesses become more reliant on individual patronage (and less reliant on passive income from ads). Sending out greeting cards during the holidays is a great way to cap the year off with a message that shows your appreciation for the people who support you. Here are a few ideas…

Designing an original card that features your comic’s characters and mailing it to the people who have bought merchandise from you throughout the year is a thoughtful, meaningful way of expressing that appreciation. This is extra incentive for designing a holiday card to sell on your website. [Subscribers can read the entire post]

Getting your art on TV… and get paid

There’s an excellent piece on the Patreon blog about an untapped revenue source for many of us creators. Allowing TV producers and filmmakers to use your art as part of their productions.

Whether it’s a landscape painting in Grey’s Anatomy or a sculpture in Austin Powers, television and film set decorators need artwork. That’s where you come in.

Read the entire piece here for some excellent usable advice.

The deadline for the Jay Kennedy Memorial Scholarship is Dec. 15. Applicants must be students at a 4-year college in the United States, Canada or Mexico who will be a Junior or Senior during the 2012-2013 academic year. Applicants do not have to be art majors to be eligible for this scholarship. [FREE POST — Read it right now]

Surprise. Thanksgiving is next week. As you know, the Friday after Thanksgiving officially kicks off the holiday shopping season for brick-and-mortar retailers. The following Monday, “Cyber Monday,” is the official launch for online sellers.

This is an excellent time to increase visibility and promotion for any new merchandise you’re offering at your store. For starters, there’s going to be a lot of focus on shopping — in the media and in real-time conversation — and as a result, people are going to be more likely to do some shopping themselves. Also, with Cyber Monday’s focus on online retail, many people who have never shopped online before — or who have limited their online spending — will be awash in a media message that tells them, in short, “everybody’s doing it.” And that might encourage some of your more hesitant readers to finally take the plunge.

Given the number of variables (newness of merchandise on your stock, availability of holiday-themed items, etc), it’s impossible to give one catch-all strategy, but here are a few thoughts. [Subscribers can read the entire post]

Twitter has improved the way it tries to address abuses of the service — in response to a sharp rise of abuse, bullying, and harassment they’ve seen over the past couple of years. Among the improvements… [FREE POST — Read it right now] 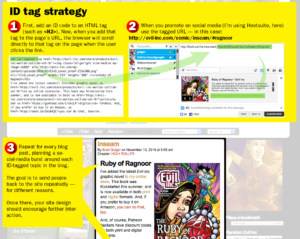 This post builds off some ideas I shared this summer.

What I have found is that I have been able to use my beefed-up blog as part of a greater social-media strategy as well. And it’s all thanks to a very simple HTML tag. [Subscribers can read the entire post]

Affiliate Advertising during the Holiday Season

As we head into the holiday shopping season, you might consider redoubling your commitment to blogging. We often talk about the importance of blogging here — as a way to establish and define Community — but this time of year, it takes an added importance… potential affiliate ad revenue. [Subscribers can read the entire post] 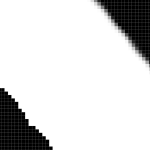 So, what does aliasing mean, anyway? Strictly speaking, thisa digital method of making graphics and text (especially text) appear smoother and sharper by resampling the edges at a lower resolution. Here’s an example (click on it to see the image enlarged)… [FREE POST — Read it right now!]

Patreon has proven to be a game-changer for may people pursuing webcomics. But some new patrons have a hard time navigating the Patreon interface to get the most out of their patronage. While I don’t mind seeing “my financial situation has changed” and “I only intended to pledge for a limited time” in my Patron Exit Surveys, I hate seeing “I’m not happy with Patreon’s features or services.”

To be fair, the “I’m not happy…” response appears rarely. But, in optimizing my Patreon approach, I’ve created something that I’m seeing very positive results from… [Subscribers can read the entire post]

Blambot is one of my favorite places to discover new fonts. This Monday, they’ll be launching a 30% off sale — Nov. 28-Dec. 5. It will definitely be worth setting aside some money for. Here’s some good bets… [Subscribers can read the entire post]

by Brad Guigar on December 5, 2016
Posted In: Information, Site News
Comments available to logged in users only.