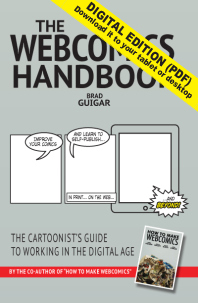 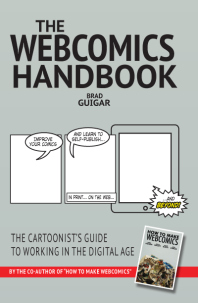 Launched as a follow-up to the seminal “How To Make Webcomics,” Brad Guigar’s guide to the art and business of webcomics is largely based on his writings at Webcomics.com — as well as his 13 years’ experience in webcomics.

In 2008, Guigar co-wrote the “How To Make Webcomics” book with his good friends Scott Kurtz, Dave Kellett and Kris Straub. At the time, this book was embraced as the “go-to” book on the subject. For years, the authors have been honored by colleagues and newcomers alike who have told them what a fun and informative read the book was.

And then, they all say the same thing: When are you gonna do a follow-up?

Unfortunately, with each of them busy with different projects, it was impossible to get everyone together to do a second edition.

Then it occurred to Guigar that ne had already written the sequel. In 2009, after “How To Make Webcomics” came out, he launched a Web site, Webcomics.com, that has been updated daily ever since with the same kind of information that was in the book. Using those posts as a starting point, he started assembling chapters and adding new content. By the time the dust settled, he had a 300-page book that covered a wider range of topics and went even deeper on the content from the original book.

AVAILABLE AS AN ARTIST EDITION! An “Artist’s Edition” is a numbered, limited-edition book autographed by Brad Guigar, and features an awesome sketch inside your cover.  After this limited run of 250 Artist’s Editions are sold, no copies of the book sold in the Webcomics.com will contain a Guigar sketch. (Be sure to make a request in the “personalize” field!)

Reviews from Goodreads.com
by Brad Guigar on October 9, 2015
Posted In: Uncategorized
Comments available to logged in users only.