A special thank-you to Philip M. Hofer, “Frumph,” for walking me through this process.

To create your own set of navigation buttons, you may want to consider copying a current set. They are located in the /wp-content/plugins/comic-easel/images/nav/ directory. Drag a copy of one of the folders to your desktop. Open the image files inside the folder and redesign them to fit your site’s look. (But first, read the rest of these instructions!)

Along with the image files, each folder has its own navstyle.css file. This CSS file has all of the information inside of it which determines which graphics to use and how the buttons display on the screen.

Open one of the images and look at it. I’ll use the “previous” arrows from the Box button design as an example.

Note: this is a PNG file with a transparent background.

Notice that there are three different image “states” inside of a single image file.

The navstyle.css file takes this image file and moves it back and forth to display the portion of the image that corresponds to the state (active, hover or inactive). In our example, the button displays in a 44 x 44 pixel area. The image file is 132 pizels wide (and 44 pixels deep). Here’s the code that does it: 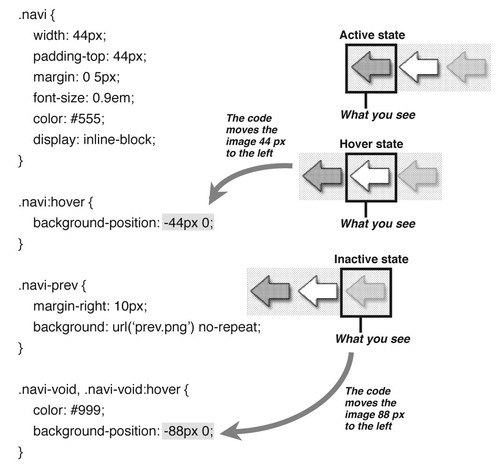 Once you’re happy with your new buttons, you’ll want to upload them to your Child Theme folder — not the folder you originally got them from!

When customizing your own set of buttons, you can use whatever height and width you want for the buttons, but remembering to alter the code in the .navi portion of navstyle.css to reflect that change. The .navi-void and .navi:hover numbers will need to be changed as well. For example if your new buttons are 50 x 50 px, the image itself will need to be 150 x 50 px (width x height), then the .navi:hover will then need to be -50px instead of -44px, and .navi-void needs to move 2 states over so it needs to be -100px.

The comic navigation widget will only work inside one of the comic sidebars: