This post originally ran last year. If you’ve ever been curious about the kind of information, tutorials and advice that you’ll get as part of your subscription to Webcomics.com, this is a good example.

Patreon is an excellent resource for generating income for creators. However, judging your potential monthly income is a little tricky. I was amazed at how much my actual income differed from what I thought I was going to make — and it had nothing to do with the reasonable cuts that both Patreon and their transaction providers take.

It has everything to do with this: 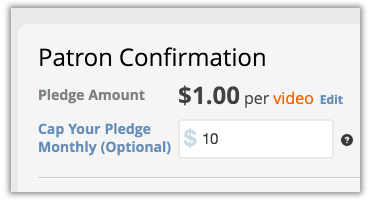 First, you have to assume that almost all of your Patreon backers have placed some sort of cap on the amount of money that you’ll be able to draw from their account every month. They’d be crazy not to.

And, for some, this is a decision that’s based on the number of times they expect you to update with new projects. For example:

A cartoonist is asking for donations each time she updates with a new page in her graphic novel. Since she usually updates one page a week, a Patreon backer might agree to donate $5 per update — but that supporter might place a $20 limit on his account. That way, he’s supporting his favorite cartoonist for every expected update* — but he’s not on the hook if she goes nuts and posts 13 pages in a week.

* And, of course, it doesn’t take into account the many 5-week months!

However, for some of your supporters, it might be a strictly budgetary consideration. For example:

Same cartoonist as above. She’s offering a free graphic novel at the $10 level. A support signs up to donate $10 per update, but this reader’s budget is such that $20 per month is the limit of their generosity. So he signs up at the $10 level (to qualify for the book) but places a $20 cap on his support. If the cartoonist updates four times, this reader will not be charged for the third and fourth updates.

All of these variables have an effect on the end result of the cartoonist’s monthly campaign. A rookie might look at their Patreon page and think, “If I’m getting $100 per update, I’ll make $400 by the end of the month.” Of course, this isn’t going to be the case. Let’s take a five-week month into consideration:

The cartoonist is earning $100 per update. She updates in the first week with a new page. She has earned $100. However, by the second update, some of the caps set by her readers have already kicked in. That second update is only worth $80. By the third week, the previous caps are still in effect, plus new caps are now being applied. This update only earns the cartoonist $50. By the fourth week, it’s $30, and so on.

Of course, these are strictly numbers that I made up so I could illustrate a point, however, it leads to a very interesting situation. If you’re the cartoonist in the example above, would you make an update in that fifth week or would you hold it seven more days until it’s worth $100 again? Plus, you’d build out your buffer in the same move!

Also, keep in kind that a percentage of pledges are declined every month. This may be because the patron made a mistake in entering his or her credit-card information. Or it could be because the card is expired or maxed out. Regardless, some of your charges are liable to be declined every month. In my own experience, this has been minimal. However, I have heard reports from some Patreon creators who put their monthly declined-charge rate at about 25%.

Finally, you should know that Paypal has a history of declined Patreon pledges. I don’t know whether this is a conflict between Paypal and Swipe (Patreon’s credit-card-transaction handler). And I’d hesitate to guess whether it’s based on the fact that Paypal and Swipe are competitors. But several creators report a long line of declined Paypal pledges. Creators of NSFW work are particularly loud in their criticism of Paypal in this regard, and many have shared conjecture that Paypal’s policies regarding adult content.

Regardless of the choice you make, know this: When you see an impressive number on someone’s Patreon page, you cannot do simple math to estimate what they’re making per month — and neither can they. That doesn’t make Patreon bad. Rather, it’s a dynamic to understand as you’re launching your own campaign.

by Brad Guigar on July 3, 2015
Posted In: Archive Dive, Marketing / Social Media
Comments available to logged in users only.