What is the standard size for a comic strip?

It’s FREE FRIDAY! Enjoy this post from the archive!

A Webcomics.com member asked me: What’s the standard size for a comic strip?

There’s no such thing as a “standard” comic-strip size — at least, not in the sense that there once was. But — over the years — a sort of accepted norm has developed.

Those dimensions were all based on newspaper standards — which may or may not be important to you. The newspaper standards were great in that I think artists were really able to fine-tune an attractive aspect ratio over the last hundred years. When you see strips that derivate from that, they tend to look very awkward.

For example, here’s a few thoughts from a Hot Seat I did a few years back… 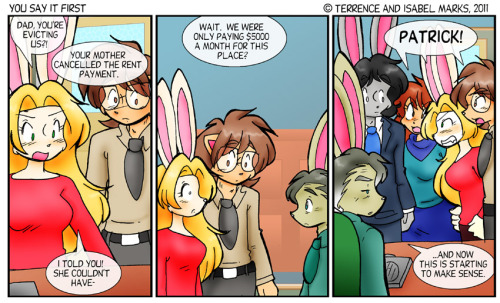 I think those panels are way too tall. If you were delivering a more detailed illustration, I could understand, but the foregrounds/backgrounds are fairly simple. The result is a visual experience that feels stretched and strained.

Besides, look at how difficult it becomes to compose a scene in which there are more than two characters. Since the scene never seems to shift off of the “puppet show” panel composition (straight-on camera angle, all characters shown from the waist up), this decision to have such tall panels is really painting you into a corner.

Even when the artist tries to introduce some depth (Panel Three), the proportions of the panel force a very flat composition. It’s almost impossible to design attractive panels under these constraints.

I’d also warn against thin gutters. Using the same comic, above, as an example, the image on the right side of Panel Two almost merges seamlessly into the left side of Panel Three. That’s a sure sign that the gutters aren’t big enough to do their job.

So… what’s the best size?

I hate to do it, but this is one of those “answer a question by asking a question” moments. And that question is: What’s your most important final presentation? The very nature of webcomics is that out work will be presented in at least two different formats — the Web and a print collection. And, depending on the nature of your comic, you could very well add more. For example, if your comic is designed to be read on a mobile device, you might decide that the best presentation is a vertical stack of panels that the reader scrolls through. If that’s the case, then your best size is based on the width of the screens your readers are most likely to use to read your work. To make the most of these opportunities, you’ll want to stay flexible so you can make the most out of all of them. But there’s going to be only one most important final presentation. Perhaps that’s a book. Maybe it’s your website. Maybe it’s that mobile environment we just discussed. But whatever it is, you need to make your comic work beautifully in that environment — and then retrofit it to work in those other places.

by Brad Guigar on September 8, 2017
Posted In: Art, Business
Comments available to logged in users only.