Five habits to adopt for webcartoonists

So much of what we talk about here is aimed at improvement — improving the quality of our work, improving the effectiveness of our online business, improving our ability to promote, etc. — that I thought it would be useful to talk about some habits that every cartoonist could adopt to foster that improvement. I think this holds true for beginners as well as veterans. These are all areas of our craft that become crucial as time wears on. And they’re areas that even hardened pros can lose track of. 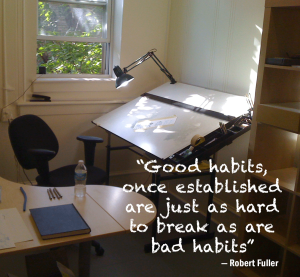 Set a deadline and stick to it

Time management is key. I actually found it easier to manage my time when I had less of it. When I had a day job, the time I had to spend on my comic was clearly defined and severely limited. So, if I was going to have a comic, it was crucial that I exploit every minute that was available to me. Having made the transition to full-time cartooning, I can confirm that my biggest enemy has been procastination. I’ve since become a strong proponent of setting deadlines and adhering to them strongly. This is one of those things in which it’s so easy to let yourself off the hook.

Except… letting yourself off the hook only gets you in over your head.

I saw a strong improvement in my writing when I built time into my work schedule for re-writes. I try to re-write every strip at least twice, making significant changes every time. When I look back at my old writing, I see concepts and gags that could have been pushed so much further — they could have been so much better — if I had just forced myself deeper into the writing process.

I see it in the Hot Seat critiques all of the time. We stop at clever when brilliant is just a couple of drafts away.

After writing itself, I’d say that lettering is the next-most-important aspect of a comic. It’s crucial. If your lettering is illegible — or if the balloons read in the wrong order — you may as well be posting blank comics. If you’re not getting a little obsessive over your lettering, you’re probably making some really dumb mistakes. And it’s those mistakes that are preventing your comic from living up to its full potential.

I chose the wording for the title of this part very carefully. Partly because social media can be a razor-sharp double-edged sword. Certainly, social media has tremendous powers of viral marketing, but it can also be a time sink. The time you spend of social media is an important part of your work day. But all too often, it becomes an obstruction to the workday. Post, promote and engage. But resist the urge to lose yourself for hours in the throes of kitten videos and (often) futile ideological crusades. That’s time (and passion) that’s better funneled into your comics.

Stop comparing yourself. For two reasons.

First, you’re not getting the whole story. That Big Book Deal that the other person signed? You don’t know whether the advance amounted to much more than minimum wage. And you don’t know what the royalties are going to be like. Don’t be too quick to jump to jealousy. Your $1,000 Kickstarter might have netted you more than their $10,000 campaign, once all the dust settles. And, let’s face it, everyone tweets when they buy their new car. No one tweets about missing a payment. For the most part, your understanding of a person’s life, when taken through social media, is skewed at best – a fun-house mirror at worst.

And secondly, there’s always going to be someone better. Always. Let’s say that you’re quantifiably the best cartoonist on the Web today. I guarantee, there’s somebody better arriving tomorrow. And there is no such thing as “best cartoonist.” No best writer. No best businessperson. No best artist.

There’s only one “best.”

If you’re focusing on being the best YOU — and letting all of those other people take their bows (and take their lumps) — I guarantee your work will take a tremendous leap. Because trying to defeat an ever-changing roster of opponents is impossible. Concentrating on yourself rather than others is the truest path towards better work. Let’s face it, it’s the only battle you have a hope to win.

by Brad Guigar on November 20, 2015
Posted In: Archive Dive, Art, Writing
Comments available to logged in users only.