Here’s a quick overview of ContextWeb and its pricing system. As you’ll see by all of the links, this is a topic that we’ve covered in several other posts, but it seems to be a good time to put everything in one place.

ContextWeb pays on a Cost-Per-Thousand (CPM) basis. The “M” stands for the Roman Numeral 1,000. So, if your ads are selling for $5 CPM, you will get $5 for every 1,000 ads that are served by ContextWeb on your site. That rate is “prorated,” so if you only serve 100 ads during a given time, you will only make fifty cents.

ContextWeb’s AskPrice is the price that you set for serving ads on your site. ContextWeb commits to paying 100% of your AskPrice for all of the ads that they serve to your sitre. But that’s the rub. Set the AskPrice too high and they’ll throttle back on the ads.

Most of your administration will take place in the Manager area. It’s the second tab from the right, once you sign in, and it looks like this (click on the thumbnail for a larger version).

Using the Manager, you can establish variables (such as AskPrice, Performance Price, default ads, etc.) and you can get feedback on how your ads are performing for a given time frame (which is determined by the Date Range fropdown).

So what’s a good AskPrice?

That’s up to you, and it’s a decision that has more variables than “what’s everybody else doing?”

My own, personal philosophy is that a 100% fill rate is an indication that I’ve set my AskPrice far too low.

The screengrab that I’ve provided has fill rates of 8% to 13%, but that’s a fairly typical result of January ad sales (as we’ve dicsussed earlier).

My recommandation is to set an AskPrice and watch the fill rate. Let it stand for a couple days to get a good measurement. If you’d like to see the fill rate rise, lower the AskPrice a little. And as you’re tinkering, watch your daily total ad revenue. Like I said earlier, a larger fill rate does you no good if you’re not selling them at a decent CPM. So your daily total revenue is going to be the final arbiter of whether you’re maximizing your sales.

So why do I recommend a fill rate of under 100%? Because ContextWeb isn’t the sum total of the ads that I run on my site. It’s the top of a chain of ads.

The process is simple. As a user loads an ad, ContextWeb gets first crack at serving an ad in that position. If ContextWeb declines, the position is thrown to a default ad. If I have multiple default ads for a single ad position, they are served according to a percentage that I determine.

Take my leaderboard for example. By clicking on the Leaderboard link on the far left of the Manager page, I get this:

Those Backup Tags are my default ads.

As a result, any ad impression that ContextWeb passes on is then delivered to one of my back-up ads. Twenty-five percent of those back-up ads are handled by Project Wonderful, 25% goes to Tribal Fusion and so on.

I just happen to have all of the percentages set equally. During the holiday season, I had about ten back-up tags set, with some of them set to 1%.

Don’t forget that you can make your own house ands and place them into the rotation of back-up ads as well. This is as simple as a line of HTML code for a hyperlinked image (hosted on your own server). Here’s my house ad for the 2012 Evil Inc calendar:

As I’ve stated in the past, I think house ads are an important part of your ad chain. Your ad space has value. You should be availing yourself of some of that value. This could be the case during those times (like the First Quarter) at which your advertisers aren’t willing to pay for the space. Or it could be during times when you have merchandise you want to be sure your readers are aware of.

I’ve recommend you enable Performance Pricing in all of your ContextWeb ads.

Your Performance Price allows ContextWeb to beat your back-up ads with paid advertising.

You should set your Performance Price to be slightly higher than the eCPM (estimated CPM) of the default ads you’re serving (even Project Wonderful).

Otherwise, you’ll be passing over a higher-paying back-up ad in favor of a low-priced Performance Price ad.

Cool tech hint: If your Performace Price is under a dollar, enter it with a zero before the ceimal point. Like this:

So, how can you set the best Performance Price? Recently ContextWeb added an optimization chart to their Dashboard. Using this, you can look at each of your default ads and see where the optimal Performance Price lies. 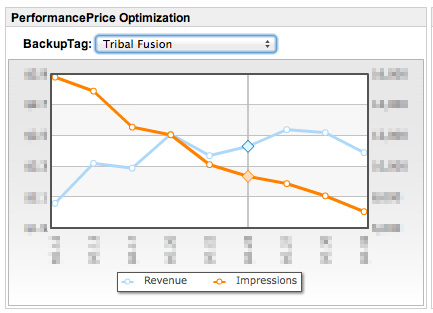 ContextWeb offers the option of serving in-text ads. Theses are ads that show up as hyperlinks in the text of your site. For example, if you blog about Star Trek, it might place a hyperlink on the word “tricorder” that takes the reader off-site to a palce where he or she may purchase a tricorder toy.

I have recommend against in-text advertising.

In participating, you’re diluting your own ability to link effectively from your site. See, aside from a double-underline, there’s nothing to alert a reader that this is an advertising link. And you have to know that you’re going to be disappointing a number of your readers — especially the less-Web-savvy ones — who are going to click on a link and be taken to an advertiser’s site against their will. And after they’ve been burned once, they may be very reticent to follow any links from your site — thus eroding your ability to direct readers anywhere on your site.

The final piece of advice I’d like to offer is about blocking ads.

Some ads may not be appropriate for your site. And if you followed the posts about Facebinks, you know that sometimes a malicious advertiser can deliver harmful material to your readers through the advertising. One way of patrolling this is to establish a list of know offenders and blocking them from your site.

ContextWeb allows you to do this two ways. First, you can block ads by ad type. So you can automatically block that content from your site. For example, one type of ad I block outright are lead-generation ads. These are ads that are placed for the sole purpose of gathering user data to deliver spam to at a later date.

Secondly, you can block ads by domain. For example, facebinks.com is on my list of domains to block outright.

by Brad Guigar on January 17, 2012
Posted In: Uncategorized
Comments available to logged in users only.