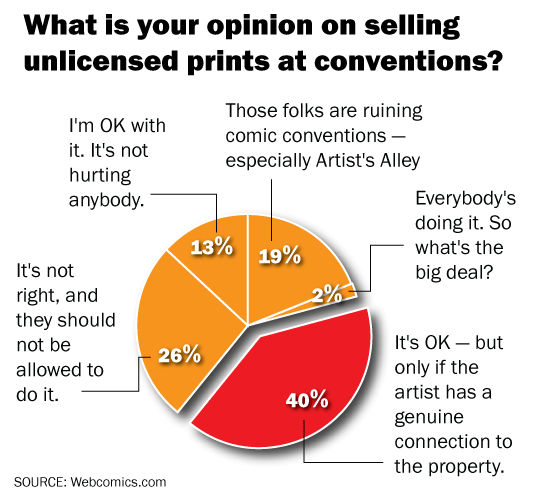 The most recent Webcomics.com Poll asked your opinion on unlicensed prints at comic conventions.

26% of you said that that it wasn’t right and that it should be disallowed.

But most of you (40%) said that it was OK — but only if the artist has a genuine connection to the property.

In fact, the majority of you (55%) felt comfortable with the idea in some way. In addition to the 40% who felt that the artist should have some connection to the property, an additional 15% said either “it’s not hurting anybody” or “everybody’s doing it.”

Mind you, the anti-unlicenced-print crowd came in at a total of 45% when “should not be allowed” is combined with “ruining comic conventions.”

Many of you took to the Comments section to elaborate. In fact, if you haven’t read the Comments, please take a moment to do so. There are excellent points being made on all sides.

Some admitted they had either sold unlicensed work at conventions — or were tempted to. They made the very pragmatic point that the unlicensed stuff simply sells better. Others  made the distinction between an artist selling a mash-up idea and a straight-out “print farmer” selling hundreds of unlicensed prints.

A few of you questioned why we even spend time wringing our hands over the impact a few small-businesspeople have on multi-billion-dollar companies like the Walt Disney Company. And one person made another pragmatic point — backed up with a friend who is allegedly a copyright lawyer* — that it would be more costly for a company to defend against this type of theft than it is to simply look the other way.

For the two percent who expressed “everybody’s doing it” … your mothers called. They wanted to know something about how your personal decision-making would be affected by one or some of your friends jumping off a bridge. 😉

And for the 13% who insisted that this sort of thing doesn’t hurt anybody, I really wonder if you apply the same logic if it were your IP being stolen. In other words, if it were your image that were being used by someone else on a T-shirt. I honestly wonder how harmless you’d think it was then. I accept that it may be a mitigated expense when we’re talking about a huge corporation, but it’s still an expense, nonetheless.

* That “allegedly” isn’t meant to be snarky. I simply have no way of backing up the validity of the statement. However, from what I know of the source — a longtime member of Webcomics.com — I have absolutely no reason to personally doubt it.

by Brad Guigar on April 16, 2016
Posted In: Site News, Webcomics.com Poll
Comments available to logged in users only.