Facebook is a major viral-marketing powerhouse. There’s no denying that. According to Social Media Examiner, Facebook dominates sharing activity by a 10-1 margin over its nearest competitor (Pinterest). But how we use Facebook — and how it processes our messages — has changed a lot over the years. So I wanted to take a little time to re-evaluate Facebook, discuss some “best practice” advice, and share a tutorial on tracking your progress. To that end, here are 10 ways to use Facebook smarter.

My friend, Dave Kellett made a wonderful comic strip expressing his displeasure with Facebook. It likened Facebook to a “Donut-stealing mobster.”

I first wrote about this topic in 2012 — in a post that explained Facebook’s Edgerank system. That’s the algorithm-based system that Facebook uses to try to optimize a user’s Facebook feed with only the posts that user is interested in.

Edgerank doesn’t make Facebook bad. It’s not a flaw. And it’s not going to change. It simply *is*.

That means posts that get interaction — clicks, reads, likes, comments and shares — are going to show up more and more often in people’s Facebook feeds. And ones that don’t quickly get shelved.

If you use that knowledge in your Facebook promotion, you can start to build posts that earn the interactions they need to propagate themselves.

According to ShareThis, sharing on mobile devices increased by 28% last year. Smartphone-sharing, alone, rose 23%, and people used their tablets to share 43% more than previously. Desktop-based sharing dropped a whopping 32%!

3. You’ve got to give in order to get

This is a main tenet in all social media, but it really seems to drive Facebook specifically — you’ve got to keep the social in social media. I think this is partially because there’s such a heavy contingent of people who you know directly on Facebook — your family and IRL friends. So when you post a clever line or two about something that’s happening to you personally, those people who know you tend to interact — and that interaction drives the post into more people’s feeds.

And as you know from #1, the more they interact with your posts, the greater probability they’ll see the next one you send out.

When I hosted a Social Media Hot Seat here at Webcomics.com, I discussed the ratio of content to commercial. Content is that fun, throwaway commentary from your personal life — or maybe it’s a passionate opinion on something that’s in the news. It’s photos of your vacation, and its you decision to share a post about retrofitting a 1998 Mac computer to enable it to surf the modern Internet. A commercial message is a post that tells readers the new comic has been posted — or maybe a Kickstarter announcement or a book release.

If your feed is dominated by commercial messages, you’re going to get tuned out by your social-media followers. Most of them aren’t there for the commercials; they’re there for the content. I think a good ration is 3 content posts for every 1 commercial post.

According to Facebook*, the most effective post on Facebook is a link to an outside Web site. (More effective, even, than posting a photo!) That’s good news for webcartoonists — because this is exactly the kind of action we’re trying to encourage. And if you’ve already addressed #2, this is downright great news. Post a link to your content, with a clever sentence or two to introduce it, and let it rip. Encouraging engagement is key.

For example, I posted the Arch Bros promo on the right with a lead-in that I knew would generate conversation:

If you remember that note from my 12yo a few days back (about avoiding sharks in the shower), then you know what the inspiration for this strip was. The more this circulates, the more I realize that the fear of a “shower shark” is surprisingly common!

I built on an earlier post that shared a moment from my personal life (remember #3?). 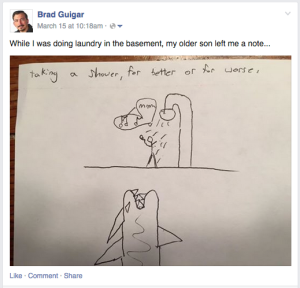 That post got a decent number of likes and comments. So I called-back to that earlier post, and I threw out a phrase that I knew was going to get a response:

The more this comic circulates, the more I realize that the fear of a “shower shark” is surprisingly common!

And, of course, this brought out all of the people (like my wife) who has been traumatized by the Jaws movies and spent childhoods fearing an attack from the drainpipe.

As of the right now, that post — originating from the Evil Inc Henchpeople Facebook Fan Page —is showing 597 people reached. I have a total of 767 likes on that page. Not a bad reach at all. Even if I factor in my 970 friends from my personal Facebook page, that’s a 34% reach!

* Scroll down past the click-bait part to “Sharing links in posts”. 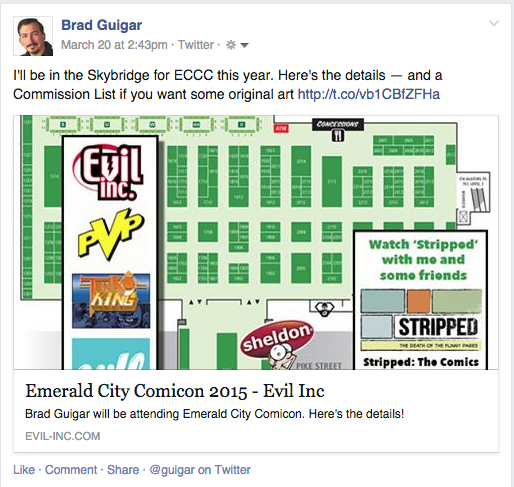 Now, write something clever in there. Start a conversation. Ask a question. Be social.

Sometimes Facebook pulls the right image for the link, and sometimes it misses by a mile. If you’re posting to today’s comic, don’t use the URL to your main site. Rather, use the URL to that comic’s archive page (aka the “permalink”).

Facebook uses Open Graph code from your Web site to build this link post. If you notice that it’s consistently failing for you, you may consider installing WordPress SEO by Yoast, which handles these elements automatically.

If you really want to fine-tune the images that get used when you post a link to one of your comics on social media, here’s a handy tutorial you’ll love.

I’ve been doing a lot of posts from my Facebook Fan Page (and then, often, sharing that post from my personal Facebook account). I think this has a lot of advantages. For example, I know that the opening Edgerank salvo is going out to fans of the comic — and they’ll be much more likely to engage the post than the populace of my personal Facebook page (which includes aunts, uncles, nieces, nephews, brothers and sisters who seldom engage to my comics-related posts).

Plus, I get access to Insights and a lot more analytical feedback than I get through my personal page.

Do we really need to review the ever-shrinking attention span of the typical social-media user? Keep it short. I’ve seen sources that say 40 characters or less! That’s a fraction of a tweet!

Great. But what’s wise? I’ve seen some sources that say posting at off-peak hours is the best (between 5 p.m. and midnight EST on weekdays). That same source encouraged weekend posts. That’s pretty counter-intuitive, but it’s worth experimenting with. Another source says early afternoon. One thing’s for sure, no one is advising weekday mornings (which is where the vast majority of my social-media time tends to fall).

Your best bet here is to do a little experimenting to see what works best for you. Luckily, you can use Google Analytics to track your results. And Webcomics.com has a handy step-by-step tutorial to help you do exactly that.

But to save you the time and trouble, here are three Analytics customization tips that you’ll start using right away:

Wanna get really fancy? Find the best hour of the best day…

So common they barely need explanation, “list” posts or “listicles” appear as the typical “5 Reasons to Create Personas for Your Business” or “The Top 7 Pinterest Marketing Strategies.” The number of “list” post shares measured in the study varied from 21,000 to 24,500 each month.

“Why content,” on the other hand, explains a concept or clarifies a topic.

You know what tanks on social media (according to BuzzStream)? Tutorials. How-to posts. They receive the fewest shares of all.

10. Do your research before paying to promote

This is old news for longtime Webcomics.com readers, but it’s worth repeating here. Veritasium has asserted that paying to promote a Facebook post could actually decrease your organic reach. It’s an argument that’s worth examining.