It’s -not- hard to get noticed

Feel free to file this under “Get Off My Lawn.”

When I was writing this post about the decreased prioritization of daily updates, it required a bit of history. In writing the piece, I reached back over 17 years of daily webcomics experience to contrast publishing then with publishing now.

The upshot is that the two are vastly different, yet most webcomics I see are still doing the things we did Then instead of innovating into the Now.

In writing it, I found myself taking a tangent into another area that requires a bit of compare-and-contrast. It did not aid in making my central point, so I edited it out of the piece. Fortunately, there’s so much there to talk about that it stands very well as its own topic.

Let’s get this out of the way, first and foremost:

It’s impossible to hide good work on the Web.

Got it? Print it out — big — and hang it over your workspace.

If your comic isn’t generating the pageviews / social sharing / income that you think it should, then the answer is staring you in the face. Your comic’s not good enough. Yet.

It’s impossible to get worse at something you do every day.*

*If you’re putting a critical eye to your work.

Those two thoughts, hand-in-hand, sum up my thoughts on webcomics popularity. And it came from hard-won experience. It came from thinking I was “there” for years and seeing other comics — comics that I didn’t think were done very well — outperforming my own. I would look at a comic like xkcd with outrage. Stick figures! He does stick figures! I draw actual images that look like things and he’s drawing stick figures! My comic is way better than his!

But his comic was connecting to an audience, and mine was not.

His comic was impossible to hide. Mine easily filtered to the middle of the heap.

Everything I’m going to write is second to those two thoughts above. 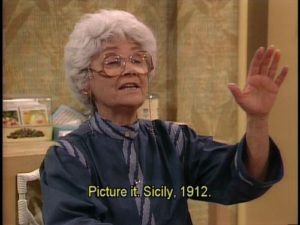 Twitter was launched in 2006. Facebook didn’t become open to the general public until the same year. (Kickstarer and Patreon would follow long after.) The original “How To Make Webcomics” book doesn’t mention any of these. They just weren’t around to be talked about at that time.

This is part of the reason I always cringe when I hear newer webcartoonists complain about how hard it is to get noticed on today’s Internet. Simply put: You folks have no idea. Once upon a time, savvy promotion came in the form of web rings and forming online pseudo syndicates (such as Keenspot and Modern tales).

You know what? You freaking kids have no idea how good you’ve got it.

Unfavorable signal-to noise? There’s always been a tremendous amount of crappy webcomics — and a relatively small number of really good ones.

Hard to get the word out? It has never been easy.

Oh, and here’s the one that kills me: The only way to be a successful webcomic is to have started in 2000? You’re (conveniently) forgetting every. single. day. of hard work between then and now. And by taking your eye off the target, you’re missing your chance to be the success story they talk about in 2030. While you’re looking behind you, the people you’re going to be jealous of in fifteen years are looking ahead. 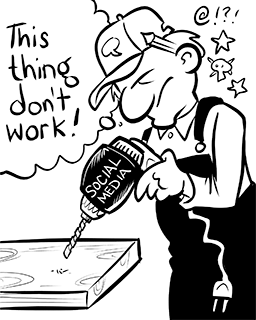 Social media is a power tool

I always look at the social-media outreach of the webcartoonists who bellyache about how hard it is to get noticed. And — overwhelmingly — I always see some pretty shoddy social media: Repetitive solicitations to look at the most recent comic, and little else of substance.

I picture them with an electric drill, unplugged, wondering why everybody seems to rave about how well the thing makes holes. Because — clearly — you’ve been drilling all day and you’ve hardly made a dent.

And so many of us simply aren’t willing to do that. We expect results without the effort — and we expect them NOW… not five years from now.

How do I know? Heh… how do you think I spent the better part of the early 2000s?

So… how do you power up social media? I’ve written about it before. It’s the Three Cs. (And most of us stop at the first one).

If you’ve already read this, skip down to The Bottom Line.

Here’s the problem: You need to promote your work more often. But if your social-media feed is nothing but you hawking your tawdry wares, you’re going to lose followers (and it’s going to be hard to gain new ones). Let’s face it, people don’t follow creators on social-media for a steady barrage of “buy this” posts. They want to interact with the creator.

That doesn’t mean less self-promotion — that means adding a lot of non-promotion posts so your copious promotion doesn’t overpower the feed.

And, of you can do that well, you can actually get away with posting a ton of self-promotion.

OK… This is why you’re on social media. As a creator, you’re not really interested in sharing cat videos or complaining about politics. You’re not here to take personality quizzes or play games. You know that social-media is the most powerful tool in your arsenal for “getting your work out there.” You want people to read your webcomic, buy your book, support your Kickstarter and back your Patreon. And social media is the best way to make that happen.

So your Commercial posts are just that — overt messages that invite people to do all of those things that will help you build your webcomics business to the next level.

Commercial messages are good. And you can get away with posting a LOT of Commercials if you balance those messages out with posts from these next two categories.

You should be striving to fill your social-media feed with as much Content as you can reasonably manage. Content is what gets shared. And shared posts bring in new followers. New followers are who you want to expose to your Commercial messages, right? So every time someone shares a post, it’s an opportunity for growth. Content gets shared way more than Commercial.

If you haven’t read this post about curating social-media feed, take some time to do so. It’s a crucial concept to understand if you want to improve your social-media power.

Here’s the problem: You can only post so much content. After all, you might not even own a cat to record on video. You might not have anything interesting to say about the new Star Wars movie. Maybe you’re kind of a private person. Maybe you’re pouring all of your creativity into you comic, and you just don’t feel like you have any left for Twitter.

I’l argue that you really should be posting as much Content posts as you reasonably can, but sometimes there’s just nothing… there.

That’s where the third C comes in — Curation.

Nobody expects your social-media feed to be purely you. In fact, they expect some of the content of that feed to be other people’s work* that you’re sharing with them.

Do you know how many people retweet and share the posts I make about other people’s comics? Maybe it’s a comic that made me laugh out loud. Maybe I’d just like to tip my hat to someone else’s work. Or promote their Kickstarter. Or retweet their book announcement. Retweets, shares, posts about other people doing cool stuff… ALL of that is like GOLD on social-media.

And without fail, those are the posts that get shared, and — in a nice little bit of social-media karma — those shared posts bring me new followers.

I love promoting other people’s work. Of course it feels good to promote someone whose work you think is good. But there’s more to it than that. The dividends are significant.

*…work that is meant to be shared

The Bottom Line: This Has Always Been Hard

That’s why I always cringe when I see a webcartoonist complaining about how hard it is to get noticed. The facts are immutable:

And the more you convince yourself that one — or all — of the above don’t apply to you, the longer it’s going to take for you to actually succeed. Because you can’t do that by complaining. You can only succeed by improving. And you can only improve by honestly and objectively looking at your flaws.

And here’s the mistake that 99% of you will make…

When you should be solving why you haven’t kept the millions of readers who have already been there.

You’re going to miss the point.

Now, get off my lawn.

by Brad Guigar on February 9, 2018
Posted In: Marketing / Social Media
Comments available to logged in users only.