Your mash-up T-shirt is not parody 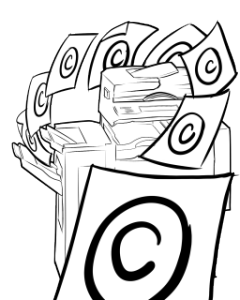 It happens regularly. An artist is outraged because someone stole their design! And when I click over, I see the design in question is a mash-up between two licensed properties that this person couldn’t possibly have the rights to. In other words, they’re complaining that someone stole the design that they stole.

And I always see the same justifications:

I’m not making any money (or very little) off this!

So let’s take a moment to understand Intellectual Property a little better.

First of all, Fair Use has a very clear legal definition. To qualify for “Fair Use” protection, you’d have to prove that the central point of your piece was to make a comment (satire or parody) on the IP — or your work was done in the pursuit of other goals (such as research, education and reporting the news).

So a newspaper can run a photo of Han Solo next to a story about Star Wars: The Force Awakens. That’s allowed under the pursuit of reporting the news. And Saturday Night Live can do a parody of the movie — because that satire makes a comment on the original work.

But a comic that mashes up Han Solo with a muppet — including a clever pun? That’s not commenting on either the Star Wars IP nor the Muppet IP (owned by Disney).

And when you offer that T-shirt for sale, your potential buyers are dominated by two groups — those who are interested in the Star Wars characters and those interested in Muppets.

In fact, if that T-shirt was to start to earn any serious amount of money, those original IP-holders could easily ask for a share. And their case would be easily proved. They’d say… “Hey… would anybody have bought this shirt this if it weren’t for the copyrighted characters?” The answer would be obvious. Burden-of-proof carried.

Very few of those T-shirt buyers are truly there for your work.

Wanna test that theory? Try marketing a few shirts that don’t trample the IP of others. It can be a bracing (and somewhat demoralizing) measurement of just how much you’re really bringing to the table.

“I’m not making any money”

The fact that you’re not making huge profits does not absolve you of copyright compliance. This is the example I use in my Entrepreneurship class at Hussian College: Let’s say you create an image to sell on a T-shirt. You’ve copyrighted that image, and it’s a part of your business. Now I come along, swipe that image, put it on a bunch of T-shirts, and I distribute my shirts to anyone who wants one — for free. You, as the creator of the original image would — rightfully — sue me for copyright infringement on the basis that I’ve harmed your ability to sell shirts by flooding the market with free ones. And you would likely win. And because you could prove monetary damages, I’d be in some serious trouble.

Which makes it all the more entertaining when someone rushes to social media to report that their mash-up T-shirt has been copied by someone else. They’re in the morally shaky ground of having to defend a work that they simply don’t have the rights to. How can you claim someone stole something that was never yours to begin with?

“But so-and-so is doing it, and they’re doing fine”

Sure they are… until, eventually, they rise on the radar of the IP-rights-holder. If the IP-owners decide to exercise their rights, they have plenty of legal grounds to shut the operation down.

Bottom line: Build your own IP

The real danger of treading on the IP of others is simply this: Time wasted can never be restored. The time you’re pumping into IP mash-ups should be time you’re working to build your own IP — so that one day, you actually do bring a legitimate audience to a product. Worse yet, what happens when you get known as the mash-up guy or the mash-up girl? What happens when you try to do something that falls outside of that sphere? Will your audience join you in that new direction? Or will you find out, once and for all, that you don’t have the droids they’re looking for?

by Brad Guigar on January 6, 2017
Posted In: Business
└ Tags: copyright, fair use, parody, trademark
Comments available to logged in users only.